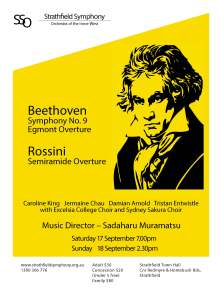 To quote the words of Richard Wagner, “I believe in God, Mozart and Beethoven”. This season, we pay homage to one of the greatest composers to have ever lived – Ludwig van Beethoven. Not only will Strathfield Symphony be performing the Overture from Beethoven’s Egmont, dictating the life and heroism of a 16th-Century Dutch nobleman, the Count of Egmont, but the orchestra will also be reprising Beethoven’s 9th Symphony, often considered one of the greatest compositions in the western musical canon. Alongside these exceptional works we will also be performing the overture from Semiramide, written by Beethoven’s contemporary, Rossini.